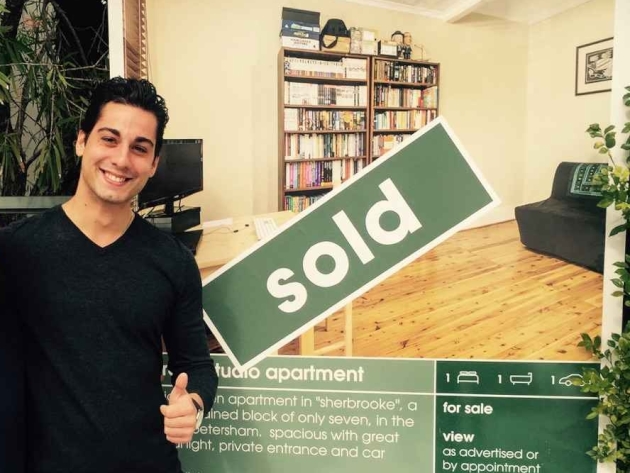 A 22 year-old with a property portfolio? A dilapidated apartment an equity goldmine? Judging a book by its cover is never a good idea, and Nikita Reskakis is living proof of it.

“People were turned off the apartment from the moment they walked in. In totally original condition it had suffered years of neglect under the ownership of an elderly lady who just couldn’t keep up with the work it required.

I have to admit, it looked pretty bad. I don’t think you would be able to consider having anyone move in while it was in that state. But it ticked all the right boxes.

Firstly, I knew I wanted something in Sydney. I’ve had relatives buy in Queensland, and in Melbourne, and they’ve always lost money. I work as a real estate agent, and even two or so years ago when I made this purchase, I could see where the Sydney market was heading.

Secondly, I work and live in Kogarah, and I decided from the outset that I’d rather buy something smaller, closer to home, and pick up on any Sydney boom faster than I would out west. Kogarah is a great area with good amenities.

At the moment there is a public and private hospital which is expanding – it’s actually going up another 10 stories, it’s bringing in a lot of nurses, a lot of doctors and just increasing the tenancy rates and the house prices.

Finally it fit my budget and my requirements. The two-bedroom, brick-built unit was within 800 metres of the train station, which was an absolute must for me.

The state of the property worked in my favour. The lack of interest saw me pick it up for a really good price of $320,000. Most people would have been daunted by the task ahead, but perhaps spurred on by youth (I was around 20 years old at the time), I was up for the challenge.

It helped that I had my grandad and dad on hand too. Together we stripped the property out. We dropped some wardrobes in there, ripped out the carpet and polished the floorboards underneath and tidied up the kitchen and bathroom.

We spent around $5,000 all up and I rented it out for $400 a week initially – just enough to cover my mortgage repayments.

The last time I looked, the property was worth $550,000. But prices around here are going up week by week, something we witness first hand in the office.

I’ve subsequently used that equity to purchase in Petersham, in Sydney’s inner west, and I’m now thinking about looking further out in the suburbs.

Saving up for a deposit as a teenager was a tough gig, but looking beyond appearances and taking future potential into consideration was an easy move."

'I made two massive investment mistakes'

‘My Sydney bargain that keeps on giving’