Peter Huang arrived in Australia from China in 1991 with US$100 in his pocket. He had borrowed money from family and friends to cover his airfare and had promised them a 20 per cent return on their investment.

After picking up his luggage at Brisbane Airport, the first thing he did was go to the Foreign Exchange Service counter to change his US$100 note into AU$125.

He was soon working four or five jobs and 100 hours a week to save money to “pay back his investors”.

“I gave some thought to my future direction and thought that real estate was probably the way to go,” he says. “In Australia there were three major industries: the first was tourism, another was real estate, and mining at the time was terrible, so it was quite challenging 20 years ago.”

Peter made the move into real estate because he knew his family back in China was relying on him to succeed. Having survived on just $125 when he arrived in Australia, he’d also become very good at saving and using his money wisely.

In 1993 he joined a real estate company, but arrived at work one day in 1995 to find his principal, sales manager and secretary all standing in front of an empty office.

Peter says there was no prior warning the business’ main investor had decided to pull the plug. There was no notice, no compensation and all the equipment, data and systems had been removed.

Distressed at the thought of leaving his vendors and landlords in a state of flux, Peter decided to launch his own company, Yong Real Estate.

Then, in 1997, a colleague gave Peter a property investment book by Jan Somers.

“After I read this book I felt very excited and realised there was a great opportunity to buy real estate,” he says.

And buy real estate he did. Within one year, he had purchased 15 properties.

He started off by buying cheap properties that were cash-flow positive. The properties were generating around a six per cent return. He says he was largely able to do this by using other people’s money.

“Property is the best way to build wealth because it is the only product for which the bank is willing to lend 90 to 95 per cent of its value. So it means the banks see property as having the least risk,” he says.

“So you can potentially leverage other people’s money, the bank’s money, to increase your return.”

Peter says if people need to ‘bounce back’ financially, property is the way to go.

In his book, The Australian Dream and $1 properties, Peter says you need to buy when there is a bargain, keep an eye out for rezoning and follow major infrastructure changes. He also says he bought when others weren’t willing to buy – “most of my purchases were properties that others did notwant”.

Peter has since moved into development and says the eventual completion value of his solely-owned land-banking properties - once fully developed - would be worth around $900 million.

From $100 to a multimillion-dollar portfolio 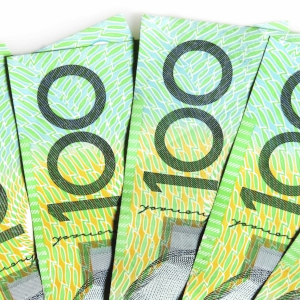