Realestate.com.au chief economist Nerida Conisbee says a rebound in the market in May resulted in another record peak, despite current median house prices.

“The Australian residential market feels almost bulletproof at the moment with continued increases in demand setting us up for even more price growth in our major cities, despite the constant speculation based on median price figures that the market is set to collapse,” Ms Conisbee said.

She said the most sought-after homes are large, sit on a block, and are located close to shops, schools, and public transport.

The top 10 suburbs in demand across Australia are:

The most in-demand area in NSW is Farmborough Heights, which is also the most in demand nationwide. Another top area in NSW is Wollongong, which boasts a positive outlook for sellers, but not so much for buyers.

“It’s great news for existing home owners in these suburbs potentially looking to sell, but the added competition will be challenging for those living in Wollongong wanting to either buy their first home or upgrade. Sydney’s unaﬀordability is contagious and it appears to be hitting Wollongong with full force,” the report said.

In Victoria, The Basin is the most in-demand suburb. It is also the second most sought-after suburb across Australia. Much like Wollongong for NSW, the Dandenong Ranges is home to several Victorian suburbs in high demand.

“Sydney has very few suburbs that are escape valves for high prices, but Melbourne has plenty, with many located in outer north east or in the Dandenong Ranges,” the report said.

“All these areas provide large blocks and large homes at more aﬀordable prices while also providing a leafy outdoor lifestyle which buyers love.”

In Queensland, the suburb most in demand is Holland Park. Only one Gold Coast suburb made it to the top 10 in Queensland, a sign that the “Gold Coast’s reign as the most popular location for property seekers looking at Queensland appears to be over”, the study said.

Western Australia’s most in-demand suburb is Shenton Park, with the current trend showing in- demand suburbs located in Perth’s inner west or along the northern beaches.

Tasmania’s most in-demand suburb is Battery Park, which has seen a high level of interest from Chinese investors. According to the study, Chinese demand rose by 70 per cent in the last 12 months.

In the ACT, Ainslie is the most in-demand suburb. Current trends reveal northside suburbs are in high demand, while southside suburbs have little interest. 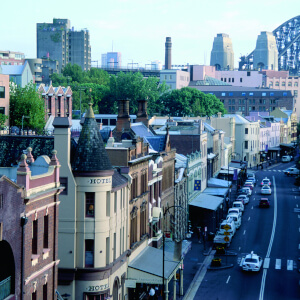