Civil works and earthworks have been completed on a $500 million development on the Gold Coast.

The Surrounds in Helensvale is set to begin construction this week after a sell-out on its first release in July 2016.

“The Surrounds is proving to be one of Queensland’s most sought after communities. We are consistently hearing from buyers they are attracted to the family friendly lifestyle and convenient connection to amenities such as shopping centres, the light rail and the easy access to the M1 motorway,” said Villawood Properties executive director Tony Johnson.

“We are working on bringing the next stage of The Surrounds land release forward to meet the rising demand in Gold Coast community living,” said Mr Johnson.

The development is located on the former Gold Coast Country Club and bordered by Westfield Helensvale and Coombabah Parklands.

Approximately 30 per cent of the land will be dedicated to green open space, which will consist of new parklands and a green buffer that fringes the site, ensuring every home is less than 200 metres from greenspace.

The Surrounds is part of a portfolio of communities from developer Villawood Properties in south-east Queensland; the three communities will bring more than 1,000 building opportunities to local builders over the next 3-5 years.

The development offers both house and land, and land packages.

Construction to begin on homes in $500m community 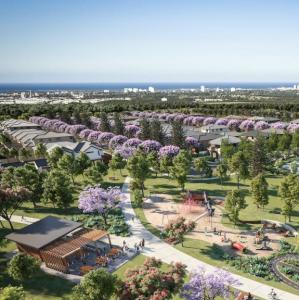