A freestanding commercial building in Parramatta with potential for future redevelopment has sold for almost $10 million.

The three-storey building at 292-298 Church Street, Parramatta, sold under the hammer for $9.75 million, for a net yield of under 3 per cent.

Jeff Moxham of Ray White said the marketing campaign for the property attracted strong interest, with more than 15 contracts issued. The purchasing pool ranged from those looking for an outright investment to those looking to capitalise on the potential development upside at the conclusion of the lease.

“Bidding started at $6 million and, with the keen competition, it quickly escalated and eventually sold under the hammer for $9.75 million,” fellow selling agent Samuel Hadgelias said.

“This exciting opportunity is walking distance from a large number of infrastructure nodes and amenities including Westfield Parramatta, Parramatta train station and the RiverCat ferry.”

Mr Moxham noted the general appeal of Parramatta and its ongoing transformation are also big drawcards.

The infrastructure spending pipeline and large-scale urban renewal opportunities for the region include the construction of the Parramatta light rail project, the $2 billion Parramatta Square redevelopment, the $200 million expansion of Western Sydney University (Parramatta campus) and the Parramatta City River Strategy. 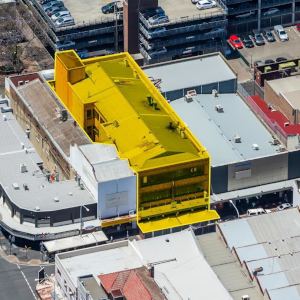