A new development in Parramatta could be set to transform the area’s growing night-time economy.

Residents and businesses in Parramatta will soon “reap the rewards of a boost to its after-hours economy” when a host of new venues open to the public next year, according to Crown Group, including three evening-trading restaurants and a bar at V By Crown Group on Macquarie Street.

A level-26 cocktail bar with sweeping views of Sydney’s CBD and Sydney Harbour Bridge is set to be Parramatta’s highest bar when it opens next year.

These announcements come just weeks after it was revealed short-film festival Tropfest will move to Parramatta in 2017, adding to more than 30 events hosted at the Parramatta Park each year.

Parramatta attracted an average of 1.5 million visitors per year in the three years to 2012 — a number expected to jump as western Sydney’s population increases by a forecasted one million people by 2031.

Crown Group is hoping to capitalise on this momentum, with V By Crown Group set to include 590 apartments and hotel suites, and resort-style residents’ amenities including a swimming pool, gymnasium and library.

The new restaurants and bars will be closely followed by the opening of Sky Hotel Suites within the luxury V By Crown Group development in mid-2017.

“Parramatta is already attracting the best and brightest executives during the day and V By Crown Group will help entice a record number of visitors contributing significantly to the city’s night-time economy next month,” he said.

“Done well, Parramatta’s night-time venues will be a drawcard for domestic and international tourism, and provide many opportunities for economic growth and benefit.

Hundreds of residents are set to move into V By Crown Group in 2017. 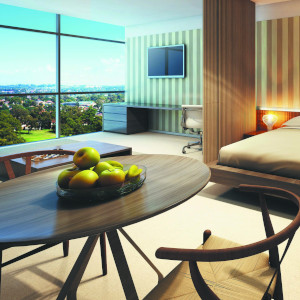