A well-known industrial site in Sydney's inner west is poised to become a residential hub.

The Flour Mill, located in Sydney’s Summer Hill, is the latest in a long line of former industrial sites in Sydney being utilised for residential development. According to developer EG, it is “a cluster of functional milling and storage buildings” from 1922, with landmark silos added in 1950. Operations at The Flour Mill officially wound up in 2009.

The new development, a joint project between EG, international designers Hassell and The Daiwa House Group, will “focus on repurposing as much of the industrial fabric of the site as possible”.

The integrated project will offer four options to investors and home buyers.

The Wheatstore: “Family home. Village life”
“The Wheatstore conceals 27 light and bright two- and three-bedroom apartments. The contrast of this unique triangular structure complements the historical aesthetic of the adjoining Durum Silos.

The Durum Silos: “Live in a silo”
“How exciting it would be to make your new home within the iconic walls of the wheat silos. The four circular towers house 56 apartments, a mixture of two- and three-bedroom, as well as one-bedroom with study.

“The exterior’s curved walls are echoed within, adding an extra layer of interest to the contemporary interiors. At the peak of the 14-storey silos sit two penthouse apartments with roof terraces enjoying spectacular 360 degree views.

“The lobby celebrates the silos' nostalgia by highlighting the beauty and strength of the original structure.”

The Granary: “Old and new home merge into stunning new homes”
“The Granary pays homage to the original buildings on site by mimicking their scale and profile. The southern four storeys represent the workshop which was simply clad in corrugated iron sheeting, and the northern nine storeys reflect the adjoining timber silo.

“The two are now joined by a continuous textured skin that reveals the interior through layers of decorative perforated mesh and horizontal louvres. The Granary offers choices of one- and two-bedroom apartments.”

“The exterior of the Flour Mill’s Malthouse celebrates the building’s industrial heritage – with angular rooflines imitating those of traditional Sydney cottages atop natural brick referencing the nearby Mungo Scott building – and its industrious past.

The intricately patterned brickwork, decorative metal screening and inviting colours engage residents and visitors alike. A 20 metre-high void illuminates the lobby with natural light. This bright welcome is carried through to each of the 98 apartments – a mix of one-, two- and three-bedrooms – which offer clear views either over the light rail corridor towards the city or the nearby parklands.”

The master-planned community will be just seven kilometres from Sydney’s CBD and will include cafés, retail space and landscaped private and communal areas, with pedestrian access to the light rail network.

Prominent industrial site to be transformed into residential development 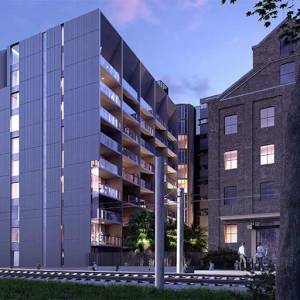