A “sustainable new city neighbourhood” which will house 3,000 residents in 1,690 homes has been given planning approval.

Melbourne Quarter, a three-tower complex on a 2.5 hectare site, has been given approval by Victoria’s planning minister Richard Wynne, enabling Lendlease to move to the next stage with the site’s residential precinct.

The development, designed by Melbourne-based architectural firm Fender Katsalidis Architects, has a “strong environmental focus”, according to Lendlease, with more than half of the site dedicated to open public spaces – including Melbourne’s first elevated Skypark, a neighbourhood park, a new public square and a series of retail laneways which will connect to the greater CBD area.

The first residential building, East Tower (located at 628 Flinders Street), will feature 40 levels and a mix of one-, two- and three-bedroom apartments.

“Melbourne Quarter, with its residential neighbourhood next to a thriving commercial district, offers the opportunity to live next to work, which is increasingly appealing for young professional owner occupiers and investors with a keen eye on the leasing market,” he said.

The creation of the $2 billion Melbourne Quarter is anticipated to generate approximately 15,000 construction jobs over the life of the project. On completion, its commercial offices are expected to be home to around 10,000 workers. 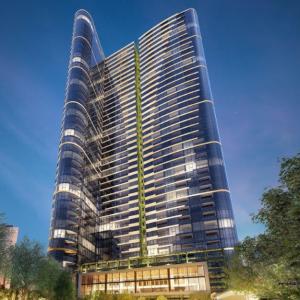