Investors in Melbourne’s CBD are scooping up prime vacant holdings in need of refurbishment or redevelopment, according to CBRE.

A recent analysis undertaken by CBRE's Melbourne City sales team highlights that while transactional activity had been restricted by supply in the first half of 2016, compared to record levels in 2015, a number of vacant buildings had sold within the past 12 months.

“Given the growth of the CBD over recent years, both in terms of population and trade, investors are extremely confident with purchasing properties that are untenanted or partially leased,” CBRE director Josh Rutman said.

“This has been driven by a more positive sentiment towards letting up risk which, based on a drop in retail and office vacancies, suggests that this risk is much lower than where it was two to three years ago.”

Owner-occupiers who are looking for a CBD presence are also opting to buy rather than lease – as highlighted by the sale of the Textile Union of Australia’s former headquarters, which sold at public auction for $4.5 million, CBRE said.

In a transaction managed by CBRE and Sutherland Farrelly, Mercy Mission Australia competed against a number of investors and owner-occupiers at the hotly-contested auction for the property.

Mercy Mission Australia purchased the property after its current leased premises in Southbank was sold to a hotel developer and the organisation was forced to find a new home.

Mr Rutman said the recent drop in interest rates to a historic low 1.5 per cent has reinvigorated owner-occupier demand, with the cost of loan interest payments in many instances similar to the rental that many landlords are currently charging.

“Whilst the banks haven’t fully passed on the rate cut, the proposition of owning versus leasing is still stronger than it has been in decades,” Mr Rutman said.

CBRE’s Paul Tzamalis went on to say that large operators like WeWork are actively pursuing larger vacant buildings to establish the co-working space concept, which has had international success.

CBRE also noted that The Just Group, another organisation that would previously have looked to lease, is now in the market to buy and occupy its own standalone premises.

Mr Tzamalis said recent changes to planning restrictions in the CBD had also meant that a number of smaller buildings could not now be developed.

“As a result, landlords or incoming purchasers are choosing to make the most of the existing buildings and giving them a new lease of life,” he said.

For example, the Poulakis family of Harrolds Menswear fame recently purchased an older building in Mill Place behind 333 Collins Street.

Mr Poulakis plans to refurbish the upper levels for boutique office space and to transform the ground floor into a hospitality space to service the student and office worker population of the area, notably Victoria University next door.

“Investors that are looking for long-term returns on their capital understand that bricks and mortar in safe havens like the Melbourne CBD are a very prudent option, and many are happy to take on vacancy risk as long as they are confident in the location,” Mr Rutman explained.

Vacant buildings in CBD being snapped up 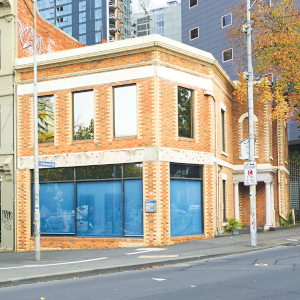