A new apartment project has been unveiled in a suburb which is being compared to New York’s Brooklyn.

National developer Cbus Property’s new development at 9 Drysburgh Street, West Melbourne, features 154 spacious apartments on an island site next to North Melbourne rail station – an area the developer says is “much like New York’s hipster suburb of Brooklyn 10 years ago, poised for rapid transformation into a Fitzroy-style spin off”.

“The building’s angular expression pays tribute to the industrial past of West Melbourne and is emphasised by strong horizontal articulation and vertical cuts to create a light footprint on the street,” the developer said.

More than 60 per cent of the building will feature expansive two-bedroom apartments, many with two bathrooms, in an appeal to the growing young professional and discerning first home buyer market.

“The Gen X and Y market has probably had the toughest time when it comes to securing their first property. They haven’t benefited from the price growth their parents have; rather, this has made purchasing a home even harder,” he said.

“A big portion of the 30-something and 40-something market is therefore changing their housing expectations and targeting generous, well-designed quality apartments they can call a home.

“This underserviced young professional market that wants to remain in the inner city is a huge opportunity and will lead the revitalisation of Melbourne’s few remaining untouched fringe suburbs such as West Melbourne.”

Just one rail stop from the CBD, West Melbourne has been “relatively overlooked in recent years”, according to Mr Pozzo, who added it is “fast catching the eye of developers and local buyers alike”.

Hayball Design director Ann Lau said the design was aimed squarely at the young professional market, with an emphasis on providing entertainer’s apartments.

“The unique triangular footprint of the site allowed us to create interesting spaces, particularly on the corners of the building, which offer 270 degree views,” she said.

“We’ve designed generous balconies and large living areas with joinery solutions that further enhance the space, so that owner occupiers feel they can have friends over for a dinner party –a rarity in inner city apartment living.”

Mr Pozzo said three retail areas at the base would reinvigorate the local area, providing space for a café and other local services.

This will be accessed via a landscaped forecourt that connects the triangular building to the street, with some apartments boasting direct street entry.

“The market will see more of these style of projects, as the rest of the development community realises the Gen X and Y market has long been underserved,” Mr Pozzo said.

“Until then, West Melbourne is a savvy place to purchase, being the last fringe CBD suburb to be gentrified. It’s like getting into Fitzroy 10 years ago.” 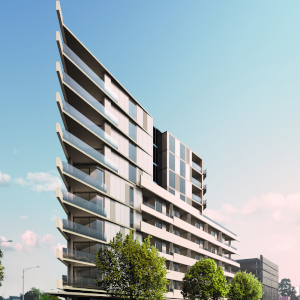