An outstanding freehold parcel of land situated on Sydney's harbourside is to be sold by way of expressions of interest, leading into a tender.

According to exclusive marketing agents Savills' Stuart Cox, Robert Lowe and Neil Cooke, this is a unique opportunity to acquire a rare freehold, mostly vacant parcel of level land, with an excellent development upside (STCA).

“Surrounded by some of Sydney's most expensive real estate, 14 Hickson Road is located within one of Sydney's most prestigious locations. Moreover, as Sydney's prime residential market continues to remain buoyant, coupled with the lack of ultra-prime sites for luxury residences, we expect strong competition for this site, both local and international,” Mr Cox said.

According to Savills, any development will need to adhere to existing planning controls within the Sydney Regional Environmental Plan No.16, including consideration of the heritage significance of the precinct.

In the neighbouring Millers Point, RP Data recorded 48 sales in excess of $2 million in 2015. Furthermore, buyers who had purchased apartments within Barangaroo have reported price increases of circa 24 per cent for a one-bed and 35 per cent for a two-bed since 2013.

“Rarely does an opportunity like this come along which provides developers a blank canvas to create a project of distinction, capturing the strong residential market within such a unique Sydney Harbour Foreshore location,” Mr Cooke said.

Located within a local landmark location, being directly opposite the Sydney Theatre Company and beside the heritage listed Hickson Steps, this iconic location will offer a new development convenient access to some of Sydney's most prestigious parks and reserves. The site has views of the Sydney Opera House to the east from Lower Fort Street, and views of Lavender Bay and McMahons Point to the north.

Walsh Bay is an inner city suburb of Sydney with neighbouring suburbs of Dawes Point and The Rocks. The site is located on the north-western edge of Sydney's CBD, at the southern end of the Sydney Harbour Bridge.

According to Savills, Walsh Bay has the key ingredients for the making of a uniquely Sydney, home-grown, 21st century arts precinct with luxury residences. Sitting along Sydney's arts and cultural ribbon adjacent to Barangaroo, one of the city's major new urban developments, and The Rocks precinct, this distinctive location is a prime opportunity to create a world-class luxury development.

With the highest concentration of arts organisations in Sydney, Walsh Bay is a historic and cultural precinct.

Rare parcel of land for sale on Sydney harbour 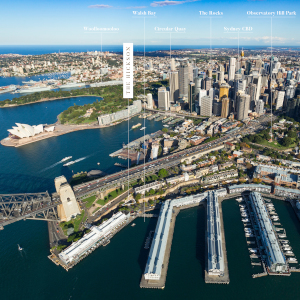