The Sunshine Coast property market has been tipped for growth for some time, and according to new research from Urbis, the Oceanside Kawana precinct will be a focus for investors.

Urbis’ director of economics and market research, Malcolm Aikman, said the Oceanside precinct exhibited strong growth fundamentals, especially with billions of dollars in infrastructure spending leading to the creation of more jobs — with significantly higher wages — and population growth, which in turn should lead to greater demand for residential property.

“The Sunshine Coast’s immediate future will be driven by solid job growth on a scale rarely seen in other locations, and the Oceanside precinct is at the epicentre of this growth,” he said.

“The $5.3 billion Oceanside Kawana project, which comprises the Oceanside Health Hub, the Sunshine Coast University Hospital (SCUH) and the proposed Oceanside Town Centre, represents one of the largest development projects in Australia and is forecast to employ 16,000 operational staff upon completion.

“This increased employment will bring many more people into the precinct, with population growth within the Oceanside catchment forecast at 2.8 per cent per annum over the 20 years to 2036, well above the 1 per cent forecast for the Brisbane LGA.

“A major demographic shift for the population is also underway, with average wages within the precinct set to increase dramatically. The average wage of a hospital worker is $92,300, more than 60 per cent higher than the Sunshine Coast LGA median wage of $56,940.”

Mr Aikman said the SCUH is not only the largest hospital project within Australia, but the largest development project undertaken on the Sunshine Coast to date, representing a major boost to economic development and employment growth for the region. It alone will employ 3,500 staff upon its opening in April next year.

Baydn Dodds of Colliers International, who is marketing residential development sites within Oceanside in conjunction with Dustin Welch of Savills, said in addition to being in a growth epicentre, Oceanside was also in a position to capitalise on the area’s existing fundamentals including proximity to transport, the beachfront and other employment nodes.

“There is also plenty of existing infrastructure and more investment in the pipeline for the Sunshine Coast more broadly, including the SunCentral Maroochy CBD development, the expansion of the Sunshine Coast Airport and the mooted light rail for the region,” he said.

“These fundamentals are key for driving population growth, and especially for apartment living, and we are seeing strong demand for this product type within Oceanside.”

According to Urbis, almost 70 per cent of the active apartment market in Oceanside is already registered as sold or under contract, with the majority of projects achieving solid sales rates and selling out prior to construction.

Mr Aikman said that while there had been highly publicised issues with apartment supply in other major markets, this was not the case for the Sunshine Coast.

“The Sunshine Coast’s current apartment supply pipeline is historically low and the apartment market will continue to be competitive in the region, particularly within Oceanside, with limited new projects expected to launch in the near future,” he said.

“Only four projects have development approval, with the proposed product mix in line with the existing trend towards larger apartments, specifically two and three bedrooms.”

According to Mr Aikman, the rental market within Oceanside is also competitive, experiencing tight vacancy across apartment developments, with demand expected to strengthen when the SCUH opens and more residents move to the area.

Oceanside Kawana encompasses around 100 hectares of land in the heart of the Sunshine Coast, including Birtinya, Bokarina Beach, a future town centre and commercial precinct.

Colliers International and Savills are marketing prime development sites within this precinct yielding between 30 and 220 units, with potential uses including apartments, townhouses, motel and aged care. 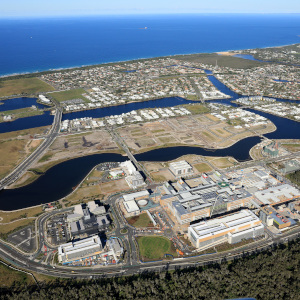