A Toukley developer has claimed it is set to transform the northern Central Coast with new development Lakeside Gardens, a $60 million waterfront residential apartment and retail project.

According to the developer of the project, the Lakeside Gardens site is the first of seven iconic development sites selected by the local council to stimulate wider regeneration, and the development proposals are a significant contribution to the billions of dollars of planned investment for the greater Wyong region.

Toukley-based developer Rustrum Pty Ltd (Rustrum) said it has been working closely with the council since 2009 to create an impressively designed building in accordance with the area’s strategic plan.

Designed in direct response to council’s key site strategic plan, formed in consultation with the local community, Lakeside Gardens will complement the natural foreshore backdrop in this long-established and popular holiday resort location, according to Rustrum.

The development is said to have been sensitively designed to integrate with and revitalise the adjoining Toukley Gardens park, which will be extended through to Rowland Terrace, thus providing new pedestrian and cycle access from Main Road to the Osborne Park waterfront.

Rustrum held a design competition to attract high-calibre, innovative proposals for its Toukley site, and after viewing submissions from four leading architects, selected Newcastle firm dwp|suters as the winner.

Rustrum said the resulting proposals provide the best balance of positive outcomes, in terms of use of natural spaces and sustainability while yielding commercial benefits for the local area.

Project manager Terry Roche of Sterlings commented, “Prospective owner-occupiers and investors will be provided with a greater housing choice, with 120 modern apartments in a location that allows all residents to enjoy all that coastal waterfront living offers, but still be in close proximity to Sydney and Newcastle.”

Local real estate agent Ron Coleman of Coleman Real Estate said, “Without parallel, this the greatest development Toukley has seen since the opening of Toukley bridge 35 years ago.

“It’s a strikingly beautiful design that will reaffirm Toukley as a lifestyle and holiday destination of choice.

“This is a real win for Toukley and the local area in general, and locals are buzzing at the prospect, with overwhelming positive feedback for this iconic development. This is the shot of adrenaline that the area has been waiting for.”

The development proposal will be placed on public exhibition this week and public comments will be sought in the coming weeks, as the council advertise and display the Rustrum development application. 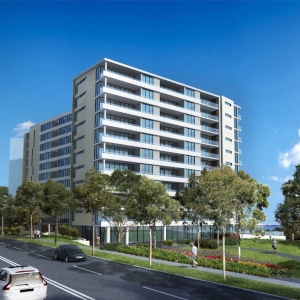