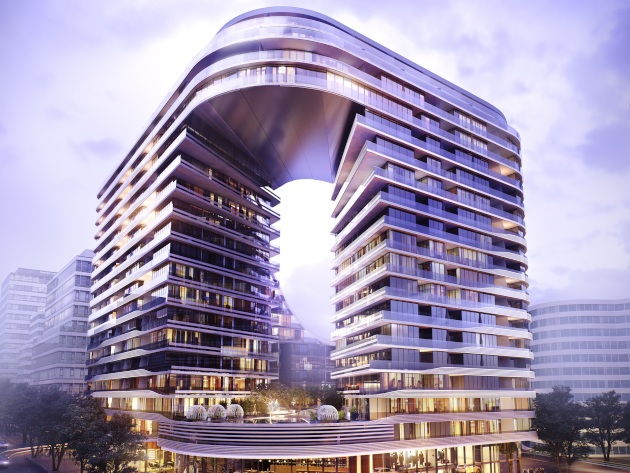 Green Square’s transformation from industrial zone to thriving residential hub has stepped up a gear as construction begins on a landmark tower.

Set to become one of Green Square’s most recognised structures, the 20-storey building designed by Koichi Takada Architects will be distinguished by its unique looped shape and a large void in its north-facing façade, allowing natural light to penetrate the tower’s 1180 sqm central landscaped plaza.

The $575-million development will sit the corner of Bourke Street and Botany Road – with pedestrian access from Green Square’s new Ebsworth Street and will feature approximately 30 retail outlets, restaurants and cafés; plus a conference centre to hold 450 people.

Crown Group CEO Iwan Sunito said he envisaged Infinity by Crown Group would become a residential and retail hub, as well as a continued driver of collaboration and innovation within the new Green Square Town Centre.

“Infinity by Crown Group has been an exceptional project from the start – from the first stages of development and design selection through to the most successful sales launch in Crown Group’s history,” Mr Sunito said.

“We are proud to mark this milestone as construction starts at Infinity by Crown Group today,” he said.

Mr. Sunito together with Sydney Lord Mayor Clover Moore turned the first sod on site at a ground-breaking ceremony attended by about 100 purchasers, many of whom will be future Green Square residents.

The company’s vision for Infinity by Crown Group was to create an icon in Sydney for decades to come, Mr. Sunito said.

“Infinity by Crown Group will set a new benchmark in city living and architecture,” he added.

The ground-breaking event comes just days after The City of Sydney revealed new images of Green Square’s pedestrian-friendly streets; including Ebsworth Street home to one of Infinity by Crown Group’s striking façades.

The City of Sydney has committed $540 million over the next 10 years to build facilities and infrastructure in Green Square including a library, a civic plaza, a new park and playing fields, an aquatic leisure centre and a new childcare centre; part of an $8-billion redevelopment of the 278-hectare Green Square precinct.

Sydney Lord Mayor Clover Moore said Infinity by Crown Group was emblematic of what the City hoped to achieve at Green Square, one of the most significant urban renewal projects in Australia.

“When completed, Infinity will be home to hundreds of new residents, its eateries and retail outlets will facilitate new jobs, while a new conference facility in the building will attract new events to Green Square," the Lord Mayor said.

“Throughout history, cities have attracted the best and the brightest and in an era with increasing competition between cities in our region, developments like Infinity and the Green Square renewal will make sure Sydney continues to do just that.”

A tiered apartment structure on the development’s south side – complete with cascading external gardens – will provide year-round daylight to south-facing apartments; while apartments on the northern-side will capture northern views and light from the north.

Architect Koichi Takada said the highly-visible site was a chance to start with a blank canvas and strive to create something new and exciting.

“Unlike other new developments which are surrounded by a well-established town centre, Infinity by Crown Group is an opportunity to showcase the future of Sydney,” Mr Takada said.

The successful demolition of single-storey commercial building on the site paved the way for construction to begin this month, starting with the excavation of a three-level, 389-carspace basement carpark.

The building is scheduled for completion in 2019. 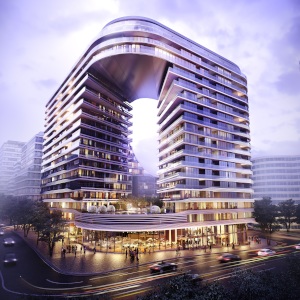