Newly-announced apartment project, The Hedge, is attracting solid interest from both home-owners and investors with Expressions of Interest (EOIs) flooding in for residential and commercial opportunities at the $55-million-plus beachside development at Buddina on the Sunshine Coast.

Lorna Willis from the Park Ave Group said the response to The Hedge had been highly encouraging since the project was announced early this year.

“In a matter of weeks we have seen a flood of EOIs from buyers realising that this is a once in a lifetime opportunity to purchase in one of the Sunshine Coast’s premium lifestyle precincts and major growth corridors,’’ she said.

Ms Willis said EOIs had been registered on 14 of the 94 residential apartments and seven of the nine commercial opportunities at The Hedge, in this very short period. “We haven’t even officially launched yet, so this has been an amazing result,” she said.

Valued in excess of $55 million, The Hedge is perfectly placed to offer a range of benefits to future residents and investors being located in one of Australia’s top 10 urban areas and is fast becoming one of Australia’s leading regional economies.

Enjoying a prime beachside location in Buddina, The Hedge benefits from an exciting regional development strategy unfolding over the next two decades which will see the economy triple to $33 billion, the creation of 100,000 new jobs in high end industries and household incomes exceeding the Queensland average.

Setting a new benchmark for contemporary coastal living in the heart of one of South East Queensland’s most vibrant lifestyle destinations, The Hedge is in very close proximity to the beach, schools, bus links, major shopping and professional services including the new $2b Kawana Health Precinct.

With a patrolled beach and local surf club at its doorstep, the project also adjoins the newly upgraded Kawana Shoppingworld which has been earmarked for further major improvements in the coming years including cinema complex, restaurants and new specialty shops.

“The Hedge offers a selection of 94 beautifully designed and appointed 1, 2 and 3 bedroom apartments with top-level sky homes up to 134sqm in size over five storeys. The double-wing building design passively integrates a useable passage way for ebb and flow between community and home,’’ Ms Willis said.

Designed to the highest standards in sustainability, high CO2-absorbing greenery integrates with internal living spaces allowing residents to connect with nature inside and out. Individual apartments capture the effects of cross ventilation and daylight reducing energy consumption.

“Optimised for efficiency and use of space, the apartments feature breezy, sun-filled interiors, modern fixtures and appliances and the highest quality designs,’’ she said.

Strong interest for The Hedge, Buddina 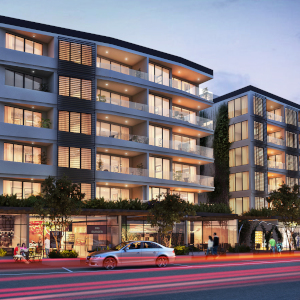