Parramatta’s new two-level penthouses have captured the attention of Sydney-siders.

A multi-award-winning property developer has today released details of three new luxury penthouses under construction in Parramatta; set to be Western Sydney’s most prized apartments.

Sitting atop the landmark 29-storey V by Crown Group on the corner of Macquarie and Marsden streets, the penthouses will offer stunning panoramic views, occupying the two highest levels of the residential tower; some of the most exclusive positions in Western Sydney.

Crown Group Director of Sales and Marketing Roy Marcellus said he had been surprised by the curiosity from general public about the three penthouses at V by Crown Group.

Demand for high-end apartments had increased as Parramatta’s workforce and population increased to include more executive-level professionals, Mr Marcellus said.

“This is our only project in Parramatta, and it is certainly among our most asked about developments and people are surprised at the standard of apartments now available in Sydney’s second CBD,” Mr Marcellus said.

“Dozens of high-profile companies are shifting their workforces here to Parramatta and bringing executive level jobs traditionally located in the CBD to Parramatta.

“These executives work hard and want their home to match their lifestyle; they don’t want to settle for average apartments,” he said.

Mr Marcellus said the larger apartments at V by Crown Group were also popular with downsizers looking for space with the flexibility to lock their apartment while they travel and also ideal for buyers looking luxury in a high-growth area.

Parramatta was ranked number one highest-performing property market in NSW in 2015 by realestate.com.au.

“The type of people enquiring here in Parramatta has changed; they are executives new to the area and also cashed-up down-sizers who want to stay close to their established network in the Western Suburbs in a lively village atmosphere,” Mr Marcellus said.

“Parramatta has been missing this more glamorous high-end level of apartments,” he added.

Inside Parramatta's most prized penthouse 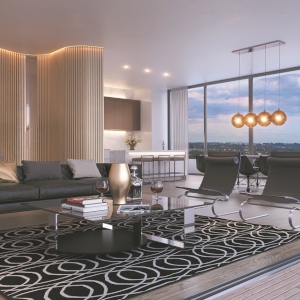