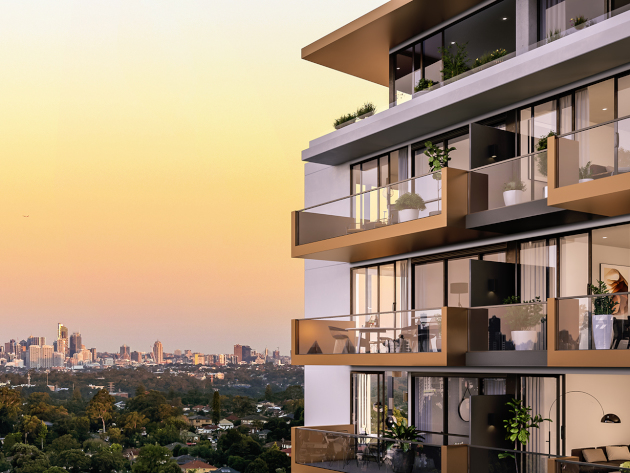 One of Sydney’s booming satellite cities is set to soar to new heights as an Australian developer and hotelier announces Macquarie Park’s tallest residential tower.

Designed by award-winning Turner architects, One Twenty Macquarie will be the latest addition to Herring Road; a thriving boulevard at the centre of the NSW Government’s Priority Growth Areas and Precincts Program.

One Twenty Macquarie will feature unique architectural ribbons forming a statement linear facade and comprise 196 luxury apartments plus premium amenities including a gymnasium, a theatrette, landscaped gardens, parking and a stylish retail café at its ground level.

Sales will begin in March.

“One Twenty Macquarie will rise above Macquarie Park to be a focal point on the skyline,” Mr Perilli said.

“This quality development will offer buyers the chance to capitalise on Macquarie Park’s exceptional growth as the city’s population climbs, employment and education opportunities expand and existing infrastructure improves,” he said.

Macquarie Park is the second largest business district in NSW, boasts the state’s largest suburban shopping centre and is projected to be Australia’s fourth largest CBD by 2030.*

“One Twenty Macquarie will be a convenient retreat in the heart of one of Sydney’s most sought-after satellite cities,” Mr Perilli added.

TOGA General Manager of Sales and Leasing Alex Adams said One Twenty Macquarie was designed to meet the needs of buyers whom sought exceptional convenience and spectacular views.

“Residents will be able to efficiently connect to major shopping centres, commercial centres, world-class university and hospital infrastructure, childcare services and key transport interchanges linking to the CBD,” he said.

“We have already been inundated with expressions of interest,” Mr Adams added.

Construction of One Twenty Macquarie is expected to commence in mid-2016.

The tower is expected to complete in 2018.