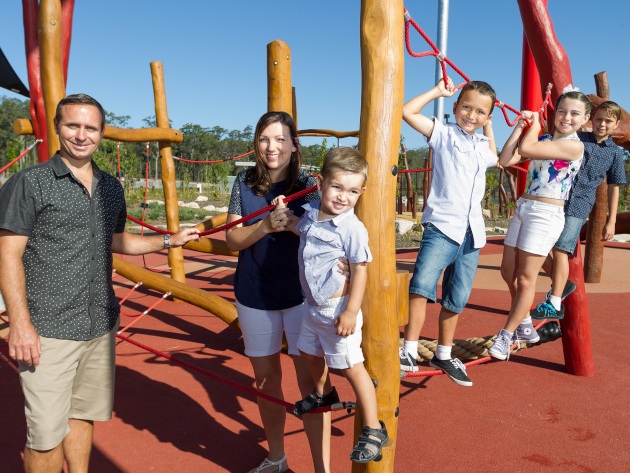 A new $1 million playground made from 52 tonnes of recycled timber is the centrepiece of the latest stage of Mirvac's Gainsborough Greens community in Pimpama.

The 6,000 square metre parkland has just opened and features log forts, a fallen tree climbing sculpture, hill slide, swing set, climbing boulders and integrated natural play environments, with about 90 per cent of the timber used recycled from the development of the community.

Two-thirds of the 40 cubic metres of wood used in the children's wonderland was Bloodwood, a timber that is not commercially viable and therefore ordinarily would have been mulched, with the remainder Spotted Gum and Iron Bark.

The playground is at the heart of the Forest Green precinct, the latest golf side release at Gainsborough Greens, and sits alongside an exclusive resident-only recreation hub and resort-style swimming pool, barbeque area and tennis court, also newly completed.

Mirvac recently released this new stage of golf side homesites at Forest Green, on the back of high demand for Gainsborough Greens following more than $26 million in sales since January.

Adenbrook, Aston Milan and Metricon have also just opened the first display homes in a new $13 million display village at Gainsborough Greens, which will comprise a total of 19 homes by 12 of Queensland’s and Australia's top builders when complete in early 2016.

Mirvac's Development Director of Masterplanned Communities Queensland, Russell Berlee, said the new park was one of more than 17 to be incorporated into Gainsborough Greens, with 65 per cent of the masterplan dedicated to green open space.

"The new park is a real showcase of what Gainsborough Greens has to offer," he said.

"The northern Gold Coast has always attracted residents who want to live in leafy surroundings, so retaining that sense of green open space is a major component of our community.

"Using recycled timber to create this playground is not only in keeping with Mirvac’s core sustainability values, but it has allowed us to create a unique parkland that will spark the imagination of children of all ages.

"Residents have been telling us their kids love using the new equipment, which is quite different from what is available in most other modern playgrounds."

The Drummond family are so excited about the new parkland that they already visit several times a week - before they have even moved into the community.

Michelle and Aaron Drummond were among the first to place a deposit for a homesite in the new Forest Green release, and will make the move from Coomera to Gainsborough Greens.

"It is so ideal for us to have a park so close and accessible, so the children can easily run down and play there," said Mrs Drummond.

"Sitting and watching the kids play, it is also really relaxing and picturesque and just adds to the atmosphere of Gainsborough Greens as a family-friendly community."

He said the community was appealing to a diverse mix of purchasers, particularly first home buyers wanting to secure a home now that will accommodate them well into the future, and second home buyers stepping into a larger family home.

"Gainsborough Greens gives residents the rare opportunity to live in a secluded environment at the doorstep of an array of shops, schools and the M1, so it strikes the balance between a green outlook and a position close to everything," he said.

"It has a real community atmosphere and offers an affordable entry to the market or opportunity to upgrade to a new, spacious home to accommodate a growing family, which has appealed to a whole host of buyers.

"We have been fast-tracking new releases just to meet the strong demand for homesites."

Golf side homesites, starting from $241,000, are available in the Forest Green precinct, while traditional homesites are selling from $199,000.

Mirvac is offering a $5,000 low deposit on homesites, with first home buyers benefiting from the additional $15,000 Great Start Grant from the Government. 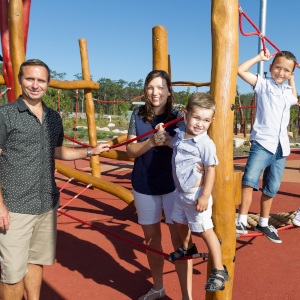