Strong investment appetite for retail investments in Melbourne has underpinned the sale of a Hawthorn café property at auction for $1.15 million.

The auction of 737 Burwood Road was hotly contested, with five bidders competing for the property, driving the price upwards from the first bid of $800,000.

CBRE Melbourne Strip Retail Investments Rorey James, Jackie Hanna and Paul Tzamalis handled the sale of the property, which was sold on a yield of 5.3 per cent.

“In a sign of continued market strength, the property was on the market following the first bid of $800,000. It was keenly contested by a number of bidders, before being knocked down to a local buyer and regular customer of the café,” Mr James said.

“The 5.3 per cent yield was considered strong, given the shops off street location, however, the low interest rate environment continues to encourage investors to pay sharper prices to secure these retail investment assets,” Ms Hanna added.

The property is leased to Café Jitters on a five-year lease, with options until 2025. 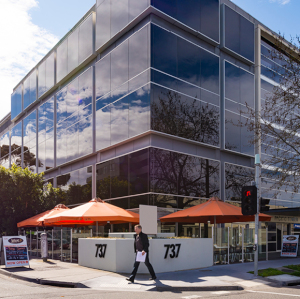