Mirvac returns to one of its favourite stamping grounds with the launch of Pavilions, at the gateway to what will become the residential heart of Sydney Olympic Park.

Pavilions will be Mirvac’s third major development in the Olympic precinct having made its mark at Newington, which was originally created to serve the needs of 15,000 athletes at the Sydney 2000 Olympic Games.

The proposed 422 apartments, designed by multi-award winning architects BVN, are arranged in four buildings, ranging from five to 15 storeys encircling approximately 4,000 square metres of gardens, with a planned retail component to include a supermarket.

At the corner of Figtree Drive and Australia Avenue, Pavilions is located within the Central precinct, part of the Sydney Olympic Park Master Plan 2030 which sets out the vision for Sydney Olympic Park to become a vibrant town in its own right, home to 14,000 residents and more than 31,000 workers.

Mirvac’s Head of Residential, John Carfi, said the development of Pavilions and the fulfilment of the Master Plan 2030 vision were important elements in the wider strategy to make Sydney a more liveable city.

“Here we have all the essential ingredients for connected 21st century living already in place,” said Mr Carfi. “We are 500 metres from Bicentennial Park, one of Sydney’s biggest parklands, there is a train that departs every 10 minutes, commercial offices, restaurants and cafes are well-established and the quality of the sporting and leisure facilities speak for themselves.

“It’s a place that is well known in Sydney and around the world, as the home of the Sydney 2000 Olympic Games and a destination for major events. However that is only one part of the story and we will be seeing a more diverse picture emerge as people come to realise its potential as a place to live and work.”

Located 14 kilometres from the Sydney CBD, Pavilions has the further advantage of proximity to Parramatta and the scientific and technology corridor linking North Ryde, Macquarie Park and Macquarie University.

Mirvac is no stranger to the Olympic precinct, having designed and built the Olympic Athletes Village which it adapted to create Newington, an environmentally advanced suburb of more than 2,000 homes and 5,300 residents.

Between 2007 and 2013 Mirvac delivered more than 900 apartments in the Rhodes Waterside precinct, which is within cycling distance of Sydney Olympic Park. Prior to that Mirvac created an award-winning community in nearby Cabarita.

“This is very familiar territory for us,” said Mr Carfi. “The area has proved a popular choice for many thousands of new residents, providing a lifestyle that is both comfortable and convenient. We understand the buyer and what they value most as an investment and a place to live and raise a family.”

The architectural firm behind Pavilions, BVN, has an Olympic pedigree as impressive as Mirvac’s, having 20 years ago prepared the Master Plan for the Sydney Olympics and designed ANZ Stadium and the tennis centre. Notably, BVN has also submitted a proposal for the Master Plan 2030 revision that is currently underway.

Architects Phillip Rossington and Abbie Galvin conceived the design for Pavilions paying heed to the natural environment, working within two imperatives – the need to retain three towering Moreton Bay figs and preserve view lines from Figtree Drive to the mound that forms the Bicentennial marker.

In a subtle but important shift in the usual order of things the four buildings have been designed to respond to the landscape rather than the reverse.

The result is a collection of four buildings that arise from the landscape with all building lobbies accessed from the garden rather than the street.

In contrast to the towers that have been built on the northern side of Australia Avenue, Pavilions marks the beginning of a finer grain of development, scaled down to offer a more grounded living experience.

“Across the street the architecture is tall and glassy, more about the sky,” says Rossington. “We chose materials that were all about the ground, of a lower scale and using face brick which gives it solidity and permanence and plays well in a heavily landscaped environment.”

The tallest tower, at 15 storeys, forms a strong gateway statement and offers views east towards the city and Bicentennial Park. Then the height drops away to just five storeys with an all-brick building that complements the Moreton Bay figs in terms of scale. Stepped back from the street a landscaped retail courtyard provides space for use as a café with outdoor seating in conjunction with a potential supermarket, open to the public but connected to the development.

The lower height allows more sun to penetrate into the central courtyard which forms a central spine radiating to the four buildings, each of which has its own associated landscape. There are passive areas for sitting and in a sign of changing times, areas designed for both children and pets.

The unmistakable intent of the design has been to connect with the landscape. Lift lobbies at each level are naturally ventilated and offer views to the outdoors rather than a tunnel of fully enclosed corridor. More than 600 bicycle parking spaces will be located undercover to encourage residents and visitors to opt for two wheels instead of four.

Liam Bowes of 360 Degrees Landscape Architects has introduced a network of pathways that provide a walking circuit and a dedicated space for children to play, protected from the majority of apartments and located alongside an indoor/ outdoor communal area.

It is the first time Bowes has been required to include a children’s play area in an apartment development and representative of a shift in the demographics of those people choosing to live in apartments.

For Bowes the fig trees provided the inspiration for the form and design of the central garden.

The central landscaped area connects to a linear park at the perimeter which extends the feeling of space and provides incentive to walk and cycle to the many inviting facilities at Sydney Olympic Park such as the Aquatic Centre, Bicentennial Park, the Brick Pit and the Blaxland reserves.

While most new residential developments wait for the parks and facilities to make them complete, Pavilions has it all already. It’s just waiting for the people. 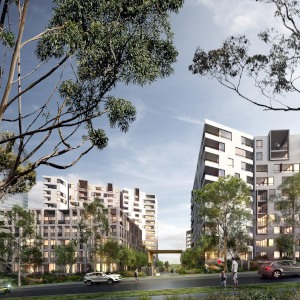