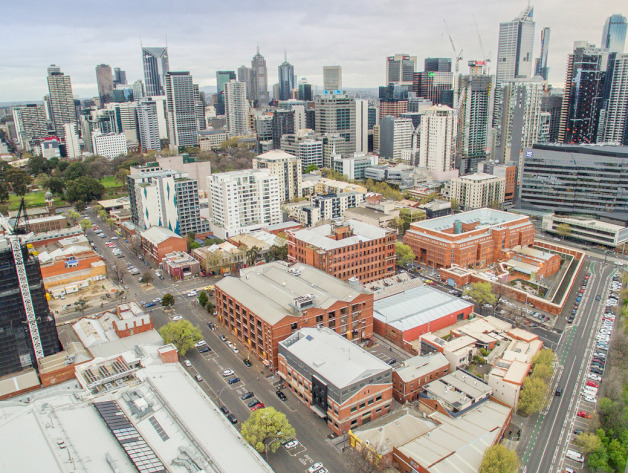 A collection of high profile commercial sites at the edge of the Melbourne CBD are being offered to the market in a move that marks the sale of one of the city’s largest development and investment opportunities for 2015.

Hume Partners has appointed CBRE Melbourne City Sales to sell what is known as the Spencer Portfolio, which comprises four individual freehold properties with a combined land area of 7,896sqm, offering expansive views to the CBD and Docklands.

Hume Partners Managing Director Scott Davies said: “These properties have generated wonderful cash flow over the past nine years and they will continue to do so, but this development approval is a game changer and it has prompted us to review our investment stance. We think this offering will have broad appeal to investors, developers and owner occupiers.”

Arguably the most significant and high profile of the sites is the 3,830sqm corner landholding at 83-113 Batman Street. The property has recently received permit approval for a twin-tower residential project comprising 522 apartments designed by world renowned architect, Bruce Henderson.

The other major offering within the portfolio is 355 Spencer Street - a six-level 7,385sqm office building positioned on a 2,003sqm corner landholding intersecting Jeffcott Street. Leased to a range of established tenants including SAI Global and ThyssenKrupp, the property is expected to attract the interest of boutique investment funds, developers and part owner occupiers.

“This site – one of the largest to be offered this year – will transform the landscape at the Melbourne CBD’s western frontier, with the development of a premier residential development repositioning it as one of the city’s most sought after postcodes,” Mr Wizel said.

“The diversity of the offering will attract strong interest from a diverse pool of buyers, with its current income offering a secure investment, whilst also holding scope for a number of development opportunities.”

“The opportunity to own a major land holding with multiple street frontages at the edge of the CBD, with the added benefit of strong income and immediate development potential, is something we very rarely have the chance to bring to the market.”

Mr Wizel said a number of larger state owned enterprises from mainland China were currently in the market with mandates for larger Melbourne sites that provide scale and the ability to stage a project over time.

“This includes groups like Wanda, R&F, Poly and Greenland, who have all made public their desire to acquire strategically located sites in and around the Melbourne CBD,” Mr Wizel said.

Recent examples of larger land transactions around the edge of the CBD include the Yarravillle Gardens sale for $160 million, Carlton and United Brewery Site for $58 million and the Kinnears Rope Factory in Footscray for $60 million.

Driven by the strength of Melbourne’s education offerings, student accommodation providers have also contributed to an influx of activity in the north and western corridors of the CBD, with some record land prices being achieved in recent times.

“Scape, Urbanest, Blue Sky and Campus are all recent examples of foreign accommodation providers who have made an aggressive entrance into the Melbourne market,” Mr Wizel explained.

Mr Rutman said the offering represented an unprecedented opportunity to own a strategic portfolio of quality freehold assets.

“This is an unparalleled offering that has the potential to redefine the CBD’s western boundaries, adding to the area’s growing desirability and ongoing redevelopment,” Mr Rutman said.

“West Melbourne has been the focus of significant renewal projects over the 24 months, and as a result, more parties – both offshore and local - are looking to this bourgeoning area for investment opportunities.

He added: “The medium house price of West Melbourne is $980,000 so the $500,000-$700,000 apartment market is seen as a genuine alternative for developers with pent up demand from buyers due to the close proximity to the CBD.”

“Many of Melbourne’s biggest developers are active or have control of sites in West Melbourne. The likes of GurnerTM, Spec Property, Central Equity and Vicland are examples of how savvy property developers are investing money into markets that have strong fundamentals and growth prospects.

“West Melbourne’s land prices are typically a third of that in the city, but with access to all the amenity of the CBD. The area is rapidly emerging as Melbourne’s next development hot spot.”