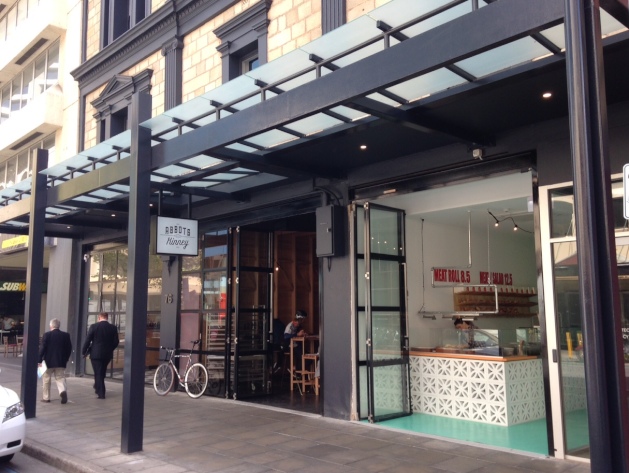 Pirie Street has evolved into one of Adelaide’s leading CBD commercial precincts, home to a number of national service providers, as well as some of South Australia’s best food and beverage operators.

In evidence of the precinct’s strengthening profile, three new food outlets have opened their doors at the recently refurbished heritage building at 76-80 Pirie Street.

George Ginos, Property Manager, Ginos Group commented: “Since purchasing the building at 76-80 Pirie Street in early 2014, Ginos Group has taken a vacant building and refurbished the upper levels into quality commercial office spaces, while the ground floor has been separated into three tenancies that are now occupied by Oggi Osteria (operated by Press’s Simon Group), Abbots & Kinney and Chicken + Pig, bringing further eating and dining options to this part of the CBD.”

“The incredible success of Mozzarella e Pizza Bar, which opened in 2012, initiated Pirie Street’s changing food landscape. It raised the bar from the standard coffee offer to a quality lunch time trade, which is clearly evident along this popular strip.”

Meanwhile, Hello Sarnie is a new breakfast and lunch bar to open at 147 Pirie St,

The outlet is owned and operated by two UK expats, Andrew Pearce and Mike Kendall-Smith, who believed there was an untapped market in Adelaide for “proper” sandwiches – those which are made fresh daily from high-quality ingredients, but are pre-packed in the grab-and-go style.

“When considering potential sites for the first Hello Sarnie store, Pirie Street was absolutely our preferred location. There is a quiet buzz about the place - the hustle and bustle of busy people working or getting from one side of the city to the other. We're excited to be here and we can't wait to see the street grow and grow,” Mr Kendal-Smith said.

Service providers are also drawn to the precinct, with existing tenants including Westpac, Telstra and Phil Hoffman Travel.

The most recent addition is national hearing group Connect Hearing, which is due to open next month at 122 Pirie Street. The group has signed a five-year lease on 168sqm on the corner of Hyde and Pirie street.

Lynn Stevens from Connect Hearing commented on the new premises: “We are very proud of opening our brand new hearing centre in the heart of the Adelaide’s CBD.”

Health Partners, PhysioXtra and Snap Fitness all have substantial sites along Pirie Street, providing a range of services to the surrounding office occupiers.

“Telstra House underwent a full face lift in 2013, which included the introduction of a retail outlet for Telstra and the addition of Grass Roots Café in the foyer,” Ms Pottenger said.

“50 and 45 Pirie have also have undertaken works to the façade and 63 Pirie Street on the corner of Pirie Street and Gawler Place is currently constructing new retail tenancies to be leased.”

She added: “There are still plenty of exciting sites to be developed including the substantial holding on the former Planet Nightclub and the re-positioning of the former Health Partners building at 86 Pirie Street.”