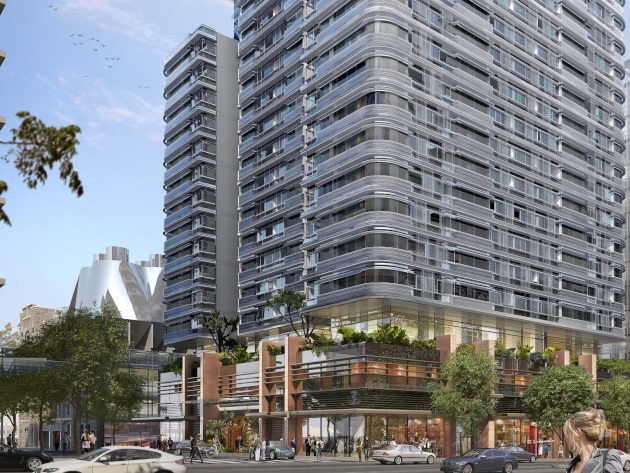 Final piece to complete the gateway to the southern Sydney CBD. DUO to be a significant project for Sydney.

Joint venture partners, Frasers Property Australia and Sekisui House Australia, have been given the green light on the next significant stage of development at the $2 billion urban village, Central Park.

DA approval has been granted by the NSW Department of Planning & Environment for what is known as Block 1, one of a pair of buildings located on the corner of Broadway and Abercrombie Streets.

This next stage of Central Park, to be known as DUO, is a $520 million, two tower, mixed-use project comprising of both Block 1 and Block 4N, which received DA approval last month.

Designed by one the world’s most awarded architecture practices, Foster + Partners, DUO will be Foster + Partners’ second residential building in Australia and will complete Central Park’s already impressive Broadway frontage.

The limited range of 48 residential apartments located on levels 11-16 of the western tower will be DUO’s premium offering – ‘DUO Limited Edition’ – with an elevated position that offers uninterrupted views.

DUO will also include a 300-room hotel, ground floor retail, 5,500 square metres of commercial space, a large childcare centre to accommodate up to 90 children and the refurbished Australian Hotel.

Central Park's Project Director, Mick Caddey, said the $520 million project will not only be a significant development for the Central Park community, but also for the precinct of Sydney’s southern CBD.

“Receiving DA approval for DUO is an important milestone for the joint venture team and we are delighted that the next significant stage of Central Park is on track. This brings the completion of this fantastic Central Park development into the near horizon” said Mr Caddey.

“The careful collaboration between Frasers Property, Sekisui House and Foster + Partners will see the delivery of two striking buildings that will further evolve Central Park’s award winning precinct, reinforcing the high benchmarks we have set in design and master planning” said Mr Caddey.

“DUO will offer the next opportunity to buy into the much sought after Central Park precinct. It will provide residents with a balance of high end lifestyle offerings, innovative design and luxury finishes. Resort style recreational facilities complete what will be an extension of this inner-city lifestyle,” added Mr Caddey.

DUO is set to be launched to the market in late November with registrations of interest currently being taken.