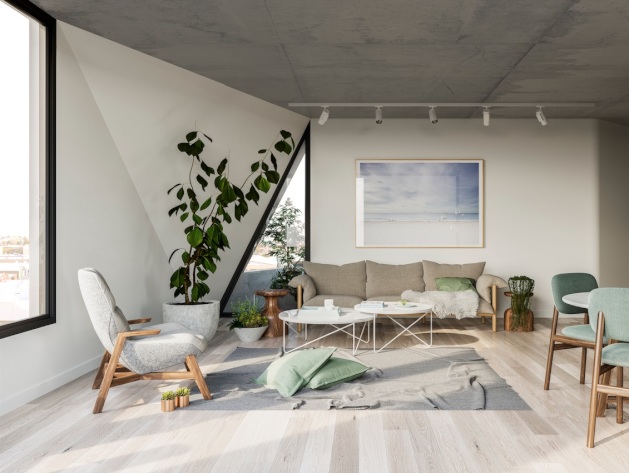 The latest development by boutique residential developer Milieu Property, Peel By Milieu will see smart design features created in collaboration with some of Melbourne’s best design talent transform the living experience in the interior spaces into a that of a home.

Set in the heart of Melbourne’s vibrant Collingwood, the north-facing nine-story residence, with exteriors designed by DKO, will include 36 one-, two- and threebedroom residential apartments, priced from $435,000 to $1.3M, with a café and restaurant included on the ground and mezzanine levels.

The apartment sizes will range from one-bedroom apartments at 45sqm to 50sqm, with the largest three-bedroom, two-bathroom, one-car penthouses proportioned to be between 97 to 105sqm. All apartments have a private recessed terrace area, which will be 6 to 9smq on the typical levels with larger splayed balconies on the upper floors, all connected to the bedrooms and living areas.

The apartment interiors have been designed as considered and connected living spaces, using a distinctively Australian colour palate and materials; with design features to make each apartment feel more like a home.

To create a unique styling initiative for the development Milieu Property teamed up with style-savvy Gorman and well-respected furniture retailer Angelucci, who combined their expertise to select furnishings, artworks, homewares and finishing touches from their own lines to style a conceptual space in the project.

Milieu Property Director Michael McCormick says, “This project is set to be a milestone in the Milieu journey, and it will reflect the distinct style and ethos that we’ve built our brand around.

“We’ve focused on creating apartments that are designed for living with flexible spaces and smart design features that will make them an exceptional place to call home,” said Mr McCormick.

The signature Milieu ‘home base’ area with an exclusive to Milieu feature desk lamp will become a space for owners to keep keys, mail and personal admin stored away.

Clever details such as USB power outlets and concealed cable management for appliances are hidden elements that will smarten up the modern-day apartments; making apartment living easy and effortless.

Customised Design Office kitchens will allow residents to close off the kitchen for neat entertaining, while generously displaying the preparations during cooking, with abundant storage, foldout pantries and home-chef favourite SMEG cooking appliances.

Window seats created in collaboration with Jardan connect indoor and outdoor spaces, and flexi spaces in the two-bedroom apartments feature a daybed snug that can be a study, guest bedroom, or simply a place to relax tucked away from the main living space.

All bedrooms in the residence will have natural light, with striking timber flooring underfoot in the living and kitchen areas. Sliding doors will act as dividers between rooms allowing for an increased perception of space while enabling residents to separate and individualise certain rooms when required; and conversely, they can help to open up a space and create an open-plan feel.

Bathrooms will be havens within the home using materials selected for their robust, tactile and natural qualities, including separate fixed and hand-held shower roses, terrazzo, bluestone and designer tap wear, and brushed and powder-coated fixtures.

Located on the corner of Peel and Wellington streets, Peel By Milieu will be ideally placed for residents to take full advantage of the Copenhagen Bike Lane (launching later this year), which the building will have built-in access to and specialist design features to
accommodate bikes.

The development includes 21 car spaces for the two- and three-bedroom apartments in a mechanical stacker arrangement entered directly from the side lane.

Peel By Milieu apartments are specifically aimed at discerning owner-occupiers looking for a design-focused abode to inhabit. It’s expected to appeal to a combination of empty nesters looking for a city ‘bolt-hole’ as well as young professionals and creatives attracted to the immediate proximity and ease of access to the CBD, Fitzroy, Richmond and Abbotsford.

Collingwood is a haven for foodies, with Melbourne artisan institutions such as Jonathan’s Butchers, Saint Crispin and Le Bon Ton all within a few hundred metres’ walk.

It’s also home to Victoria Park and is a stone’s throw away from Abbotsford, the IMAX Cinema and the Melbourne Museum. Milieu Property launched the development through a photography exhibition in the existing empty warehouse space of their future Collingwood project site.

The temporary gallery will host a series of exhibitions created by talented Melbourne photographers and inspired by the city and its vibrant neighbourhoods. 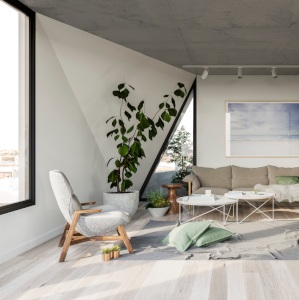