Beaudesert is gearing up to become a 'satellite' suburb for Brisbane, with significant property and infrastructure projects in the pipeline expected to more than triple the town's population over the next 20 years.

Reports from Scenic Rim Council show that the town's population is expected to jump from 14,000 to about 47,000 by 2036, with Beaudesert real estate agent Bill Ouston tipping much of the growth will stem from people relocating from Brisbane, Ipswich and the Gold Coast.

A major driver for this growth will be the newly approved $27.5 million Beaudesert Bypass, which is critical to the evolution of the Bromelton State Development Area - a 15,000-hectare site located six kilometres west of Beaudesert with the potential to create up to 18,000 jobs.

Another boost for the town is the approval of a new 339 hectare masterplanned community - which will effectively double Beaudesert in size. The new development, which will be called Oakland Estate, will boast a mix of residential, retail, commercial, education and lifestyle amenities, and is expected to be brought to market later this year.

Earthworks have recently commenced on site and developer Robinson Projects expects Oakland Estate will be a billion dollar plus project over the next 15 years.

Mr Ouston says the promise of new jobs and new development will entice people from surrounding city regions who are either looking for a lifestyle change or wanting to take advantage of regional employment opportunities.

He says while Beaudesert has been a solid performer in recent years, the market had become frustrated by a lack of new product and opportunity due to tightly held property and businesses.

"Locals have been holding on to their properties and businesses for generations because they want to stay in the area that they know and love, so people from surrounding areas have been waiting for new opportunities like Oakland Estate in order to establish themselves here," he said.

"The lack of supply means that property values have been well preserved, with an average new home in the area selling for around $400,000 - and that's increased by about 7 per cent over the past five years.

"New homes, schools, shops and parks will breathe life into the community and will encourage more people to look at Beaudesert as a great place to raise a family.

"We already have a thriving agriculture and manufacturing industry here, but the development of the Beaudesert Bypass to open up the Bromelton State Industrial Park will bring a whole raft of new trades and opportunities.

"It will open the door for people from surrounding areas to move to the town - which is closer to the city than most people think, with Brisbane and the Gold Coast both less than an hour away, so people who are moving for a lifestyle change can easily commute to work."

Mr Ouston said Beaudesert was an attractive option for those looking for a tree-change without the loss of urban conveniences.

"Beaudesert is a well established township and many people who visit are surprised about just how much it has grown in the past decade. We have all of the major supermarket retailers, restaurants and fast food chains and car dealerships here, supported by a network of quality schools, health and sporting facilities, so you really don't have to leave town for anything," he said.

"It's a real alternative to other Brisbane satellite suburbs like Yarrabilba and Ripley Valley, which are brand new but have very little in the way of existing infrastructure and amenities.

"The Scenic Rim is best known to visitors for its incredible food and wine trails and beautiful scenery, but the locals live here for the sense of community and freedom of country living - it's very peaceful and the people are friendly." 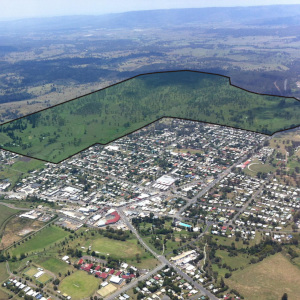