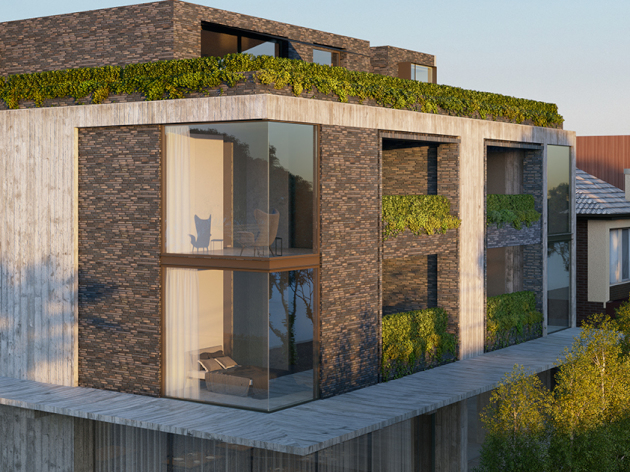 The local company has secured $2.95 million for its 172.2 square metre Elwood House penthouse, equating to more than $17,000 per square metre – well above the average $12,500 square metre rate in the suburb.

Designed by Woods Bagot and with interiors by Hecker Guthrie, Elwood House has reunited the dream team behind Piccolo’s 2011 Carlton apartment project The Garden House, a winner of six major property and design awards.

The boutique apartment project, comprising 31 beautifully appointed residences aimed at owner occupiers, is already 70 per cent sold following its launch in April. In the final week of May more than $5 million worth of sales were negotiated.

“Size is the new luxury in the market right now. Buyers are responding to the larger apartment size and efficient footprint that maximises space, as well as expansive terraces. The innate style Hecker Guthrie has brought to the project is a major point of difference in the market,” he said.

“The record price per square metre achieved for the penthouse is evident of the confidence in the design and delivery of this project.

“We had three purchasers vying for the penthouse on opening weekend, all taken by the expansive internal size and wrap around north-facing terrace that is a rarity here in Elwood.”

While the purchaser wishes to remain anonymous, Mr Kasper said it was a professional couple in their mid 50s and downsizing from their family home.

“What is fantastic about Elwood House is that all other apartments feature the same level of quality and finish as the penthouse, so all buyers – even at more affordable price points – are buying a luxury lifestyle.”

Piccolo will commence construction on the project in July and has appointed luxury specialist builder VCON, which has a strong track record of delivering architecturally complex and distinct projects.

VCON director Anthony Morton said its sister company Element Five would also bring its multi-residential experience to the project, which is expected to be completed within 18 months.

“This is a complex project in its level of detail. The natural finishes and materiality of the building requires a craftsman approach to construction and a certain precision,” he said.

VCON has worked closely with Piccolo to forecast the process, anticipating extensive attention-to-detail in order to deliver on the project’s vision. This will include a combination of tilers and bricklayers laying the building’s feature Danish bricks. The laying procedure involves viewing each placement individually due to the unique hand-made nature of every single tile and brick. It will also require extensive on-site formwork to achieve the building’s granular concrete finish, which is also applied to the precast concrete walls.

Piccolo director Michael Piccolo said he was pleased with the initial response to Elwood House and felt it was on track to surpass The Garden House in its quality and design.

“We asked Woods Bagot and Hecker Guthrie to improve on perfection with Elwood House and they have done. It is exciting to now have a team in place to deliver that perfection,” Mr Piccolo said.

Located on the corner of Pine Avenue and Ormond Road, Elwood House features one, two and three bedroom apartments that offer a rare chance to live just steps from the friendly neighbourhood village of Elwood and a short walk from the beach.

A lesson in timeless contemporary architecture, the building’s calming façade melds exposed concrete, slender profile brickwork handmade in Denmark and irrigated balcony planter boxes overflowing with greenery to achieve what will be a landmark piece of architecture in the community.

Aimed at downsizers and affluent young purchasers, apartments are generous in size and amenity, all featuring expansive terraces. One bedrooms average a generous 50 to 80 square metres, while two bedrooms provide space to grow at 100 to 115 square metres and three bedrooms at 130 to a large 170 square metres. 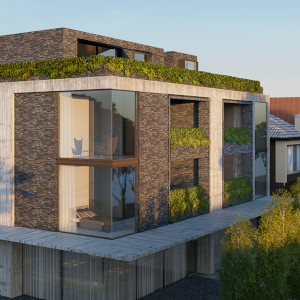