Sales for a development in Sydney’s inner west will open next week, set to coincide with the local and international launch of the project.

Crown Group this week unveiled digital renderings of the Crown Ashfield’s much-touted pavilion rooftop, as well an open-air atrium, in an effort to increase the project’s visibility prior to its launch next weekend.

The company reported that it has received over 1,000 enquiries concerning its Crown Ashfield project, with the development to be launched in Sydney, Indonesia and Singapore on Saturday 23 May.

“There’s a growing demand for high-end apartments in Ashfield and people are looking for something unique with an element of luxury,” Mr Falas said.

Other outdoor features of Crown Ashfield, reported to cost $88 million, include barbeque facilities, a landscaped garden, mature trees, a gymnasium and an outdoor dining and retreat area.

The development is due for completion in mid-2016. 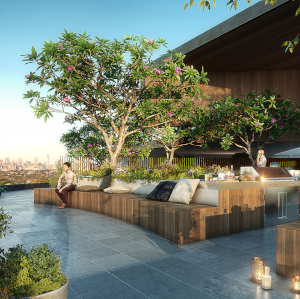