Buyer interest in a master-planned community currently under construction in Mackay is being cited as an example of the region returning to form.

‘Somerset Park’, a master-planned estate in the Mackay suburb of Andergrove, has been receiving a high level of interest from homebuyers, with the developer claiming the region has turned a corner.

The Mackay region, which is highly reliant on the coal mining industry,  has been reported as suffering from a dip in global commodity stocks and the transition from mine construction to production.

TOTAL Property Group managing director and Somerset Park marketing manager Adrian Parsons reported that stage one of Somerset Park had almost sold out, with only a limited number of completed homes remaining.

The developer, Trinity Property Consultants, anticipates that construction will be completed in two to three years’ time.

TOTAL Property Group describes Andergrove as being in “proximity 13 schools, the Central Business District, parks, sporting facilities and medical facilities and a short drive to shopping centres and a variety of entertainment opportunities”.

Mr Parsons believes that the development is proving attractive to buyers because the master-planned model – wherein one building company is tasked with constructing all homes in the estate from a pre-defined options schedule – means that “the quality of their home investment is protected”.

He went on to suggest that “This gives Somerset Park an edge when it comes to attracting the attention of buyers looking to get into the market at the beginning of the recovery swing upwards.”

The group cited a report from the Real Estate Institute of Queensland (REIQ) and comments from REIQ zone chairman for the Mackay district, Peter McFarlane to reinforce their claims that the area is recovering from its slump.

According to the developers, the December Quarter 2014 Queensland Market Monitor report, issued by the REIQ on 9 March, 2015, “showed that Mackay has moved past the bottom of the housing market cycle upwards to recovery.

Mr McFarlane said that the improvement was partially due to a stabilisation in mining sector employment and record low interest rates.

“Employment in the Bowen Basin mining sector is more secure as it moves from the construction phase to production phase, and we are seeing coal production increasing. We are now exporting more coal off the coast of Mackay, and overall there is a growing level of confidence in the region,” Mr McFarlane was quoted as saying.

“These factors have led to more people inspecting real estate, more activity in the sales arena and a boost to the rental market,” he said. 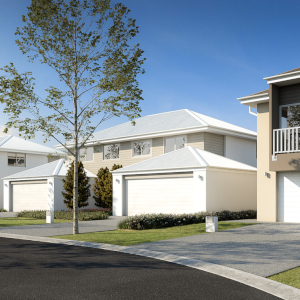