The details of a new apartment development in the Sydney suburb of Ashfield have been unveiled by the developer.

Crown Group’s Crown Ashfield will be a nine-storey residential tower – with an estimated construction cost $88 million – and will house 79 apartments and four retail spaces.

The building, designed by Surry Hills firm Turner, will be at 168 Liverpool Road.

Architectural features are set to include an internal atrium, a water feature, a grand lobby and rooftop terrace with city views.

Iwan Sunito, chief executive of Crown Group, said the building’s design was a response to buyer demand for a development that promotes relaxation and convenience.

“Crown Ashfield will be a sanctuary for its residents, a place where they can feel revitalised after a busy day,” Mr Sunito said.

“We understand our residents want to live close to shops and public transport, but they also want balance; they want their home to be an escape and a place to relax, with common areas bathed in natural light, lush greenery and first-class residents’ amenities.”

“Crown Ashfield will present as a high-quality, contributory piece of contemporary architecture, prominently located along the ridge of Ashfield,” Mr Turner said.

Floorplan details and pricing are set to be released in coming weeks, with project launch scheduled for May.

The development is scheduled for completion in mid-2016. 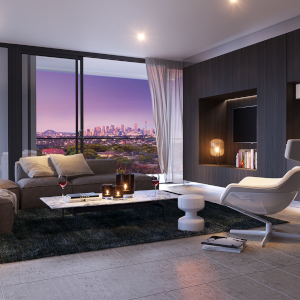