A joint venture project on the banks of the Parramatta River has been approved by a government planning agency, with the development set to revitalise the foreshore area of Sydney’s second CBD.

Residents will have access to a club floor that incorporates a lap pool, gym, spa and sauna facilities.

The building will also feature an enclosed sun terrace with river views and terraced gardens with barbecue facilities.

An exhibition centre – to be owned by Parramatta City Council and operated by Dockside – will form the central component of Riverside Tower.

Parramatta mayor Scott Lloyd said the development will make a significant economic contribution to the Parramatta area, which has recently received the same status as the City of Sydney.

“It is estimated about $13 million to $14 million per year in extra revenue will be generated for restaurants in the vicinity, with the Conference Centre adding another $20 million annually to the local economy,” Councillor Lloyd said.

Outside of the building, a major component of the project will involve upgrading more than 4,400 square metres of publicly held land surrounding the complex, including a section of the river foreshore.

The project, expected to be completed in 2018, will take shape on the old Lennox Bridge car park site.

Johnson Pilton Walker has been selected to handle internal and external design and landscaping for the project, with Hutchinson Builders slated to for construction.

Work is set to begin later this year, with further information on apartment floor plans and prices to be released later. 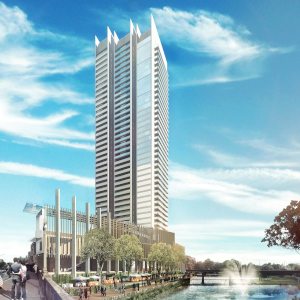