The latest development in Sydney’s Green Square is moving ahead of schedule after an enthusiastic response from the market.

Ovo, marketed as a premium apartment development by Mirvac, is set to become the tallest tower in the Town Centre of Green Square.

Consisting of 224 apartments, the development is at the northern end of the Town Centre.

Green Square is the site of one of the largest urban renewal projects in Australia, with several high-rise residential apartment blocks being built in the former industrial zone.

The development was announced by Mirvac in partnership with UrbanGrowth NSW, the government body tasked with overseeing Green Square’s growth as a new employment and residential hub in the inner city.

Mirvac is just one of many developers with buildings slated for Green Square. Together with Urban Growth it forms the Green Square Consortium, after purchasing Leighton’s 50 per cent stake in the consortium.

“Due to the successful sell-out of Green Square’s first two buildings, Ebsworth and No. 8 Ebsworth, we have fast-tracked the launch of Ovo – and if last November and December are anything to go by, we are anticipating an enthusiastic reception from the market,” Mr Razza said.

Mirvac expects construction to start in the second half of this year, with a scheduled completion date of early 2018.

Apartments will be released for sale in coming months, with the developer now taking expressions of interest. 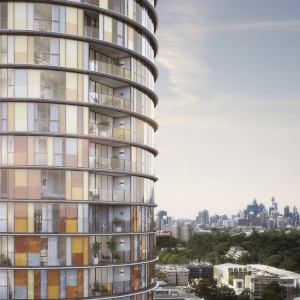