Construction has begun on the residential section of what will be Brisbane’s tallest apartment building, coinciding with the second release of apartments.

When completed, Skytower – a joint project between Billbergia and AMP Capital – will be the tallest residential building in Brisbane and the third-tallest in Australia at 274 metres.

The second round of apartment offerings was released to the public on Friday 10 April.

The building is expected to house 1,119 apartments, ranging from one to four bedrooms.

Prices begin at $425,000 for a one-bedroom apartment on the lower levels of the building.

The first release took place in November 2014, with AMP fund manager Warwick Petschack recently stating that about 550 apartments had already been sold.

Penthouses, designed according to market demand, will be released at a later stage.

The Skytower project will be adjacent to a five-star hotel and incorporate a sky recreation deck on the 89th floor, which includes Australia’s highest infinity-edge pool.

The 222 Margaret Street site has been subject to previous development plans, with Austcorp starting work on the basement car park as part of its Buchan Group-designed Vision Brisbane project before it was abandoned in 2008 as a result of the the global financial crisis.

The eight storey-deep car park has been completed and is expected to be open to the public while the tower development is completed. 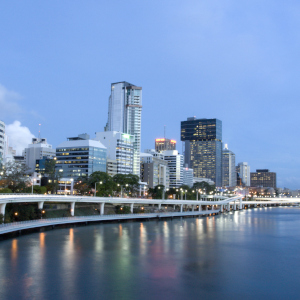