A prominent Sydney property developer has renewed its pitch to high-end apartment buyers, highlighting the attributes of its penthouses in the lead up to its latest release.

Crown Group has released details of its Parramatta luxury penthouses slated for release in late 2015, outlining the strong sales for similar residences at its inner-city developments in Sydney and North Sydney.

The ‘V by Crown’ development will feature six penthouses on the two upper levels of its 29 storeys.

Crown claims that future residents will have uninterrupted views of the Sydney CBD or the Parramatta skyline and parklands, as well as car spaces and storage.

The first apartment releases at ‘V by Crown’ commenced in 2013, with construction scheduled for completion in 2016. The project was launched in 2012.

The building is located on Macquarie Street in the Parramatta CBD.

Crown Group director of project and commercial sales, Anthony Falas, indicated that the entire development was being targeted at prestige buyers.

“The penthouses at V by Crown will be arguably Parramatta’s most outstanding apartments showcasing all the benefits of luxury living in Sydney’s second CBD,” he said.

“That was a new thing for Parramatta and it sold very well, it was very attractive for tenants and buyers,” he said.

Since then there have been numerous developments announced for Parramatta which have been styled in the same vein, including a Meriton serviced-apartment complex.

“It seems to be the trend for luxury five-star resort-style apartments – there’s quite a few of them coming up in Parramatta,” Mr Derbas said.

The Parramatta-based agent attributes the demand for apartments to the increasing recognition of the city as Sydney’s second employment hub.

“People recognise that Parramatta is a thriving city with lots of work and nightlife and social life, the restaurant strip is quite famous as you might know. You’ve still got the river here, which they’re upgrading the foreshores of. You’ve got Parramatta Park. It’s very central to the rest of Sydney, whichever way you go. There are a lot of facilities out here, but mainly a lot of work,” he said.

The market is stronger than it has ever been, on the back of this jobs-driven population growth, with all types of stock moving quickly, he said.

“I’ve sold real estate in Parramatta, in and around Parramatta, for 23 years and I’ve never seen the market this strong. Everybody knows that the market is very strong, but that’s everywhere really.”

“Any property that comes up is selling very fast, whether it’s a high-end two-bedroom apartment for $800,000 in the V Building or a $300,000 studio or one-bedroom unit, they’re going just a fast. We don’t see any particular sort of trend,” he said.

According to Crown the last of its ‘Skye by Crown’ penthouses in North Sydney was sold last week.

All of the penthouses in the ‘Crown by Sydney’ development were sold within 45 minutes of going on sale in 2014, excluding a top-floor ‘master penthouse’ to be held by the company as a serviced apartment.

Crown is drawing on this strong performance to make broader conclusions about the luxury apartment market in Sydney.

“The success of Sydney by Crown’s penthouses is proof the luxury market is alive and well,” Crown Group director of project and commercial sales, Roy Marcellus said. 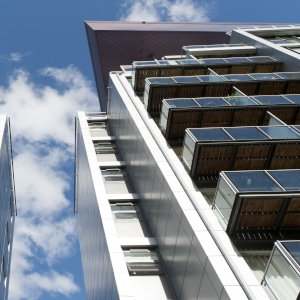