Residential construction is surging on the Gold Coast, driven by high levels of infrastructure development, according to a major real estate group.

According to Tony Holland, director of residential at Colliers International, the Gold Coast is currently Australia’s most undervalued real estate market.

He said favourable conditions were attracting developers to new housing and apartment projects.

“They can see that the time is right, with new apartment supply at 30-year lows, combined with record-low interest rates, a buoyant Sydney, Melbourne and Brisbane property market and ever increasing demand from the Asian market,” he said.

He predicted residential development will boom in coming months, on the back of large-scale infrastructure investment.

“The number of cranes in the sky is likely to double in six months’ time with a number of developers now moving forward with launching their projects to market in the next 60 days,” he says.

“Major infrastructure and development projects are the drivers of most property resurgences, as is the case here on the Gold Coast.”

In particular, he tipped Southport as an growing hub for the Gold Coast area.

“Southport is undergoing an urban renaissance and emerging as a vibrant CBD hub. It is extremely popular with Asian buyers and will be home to the new Chinatown precinct,” he said.

Love Smart Property Investment? Join us on Facebook for the latest! 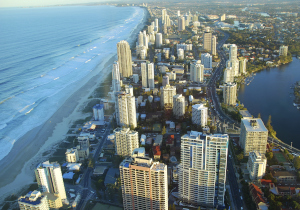