A tourism-driven region in Queensland is now host to four of the nation’s top 12 suburbs for rental yield for units, according to new research.

Cairns City and surrounding suburbs Edmonton, Westcourt and Manunda all have yields of 8.5 per cent or above, ranking in the nation’s top 12 suburbs for rental yield, according to the Bank of Queensland’s (BOQ) Buyer’s Guide.

The guide, powered by RP Data, reveals the suburbs are all above the national average rental yield of 5.5 per cent – with Cairns City boasting 13.8 per cent, Edmonton 13.4 per cent, Westcourt 9.1 per cent and Manunda 8.5 per cent.

These figures bode well for people already in or looking to get into the Cairns property market, said BOQ North Queensland regional manager Brendan Jones.

“House prices have risen strongly across Australia over the past couple of years, driven by strong population growth, a period of under-building, particularly in Sydney, and very low interest rates – with house price strength most predominant in Sydney and Melbourne,” he said.

“House price growth Australia-wide is likely to moderate to a more sustainable pace, notably in Sydney and Melbourne, reflecting the already high level of prices in those cities. If rapid price growth continued in those two cities, it would likely lead to action from the RBA and APRA.

“The changing nature of economic growth will impact property markets, for example, a lower currency should help support the domestic economy, particularly in regions such as the Gold Coast and Cairns that have relatively large tourism sectors.” 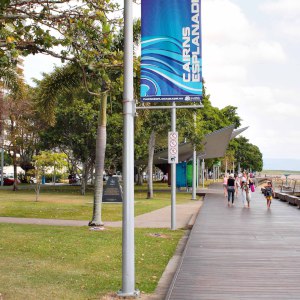